To Seduce a Stranger by Susanna Craig - Cover Re-Feature and Giveaway! 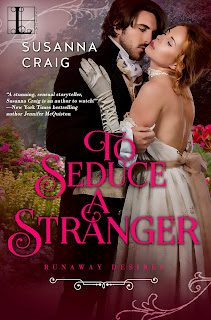 Desire waylays the plans of a man with a mysterious past and a woman with an uncertain future, in Susanna Craig’s unforgettable series set in Georgian England.

After her much older husband dies—leaving her his fortune—Charlotte Blakemore finds herself at the mercy of her stepson, who vows to contest the will and destroy her life. With nowhere to turn and no one to help her, she embarks on an elaborate ruse—only to find herself stranded on the way to London . . .

More than twenty years in the West Indies have hardened Edward Cary, but not enough to abandon a helpless woman at a roadside inn—especially one as disarmingly beautiful as Charlotte. He takes her with him to the Gloucestershire estate he is determined to restore, though he is suspicious of every word that falls from her distractingly lush lips.

As far as Charlotte knows, Edward is nothing more than a steward, and there’s no reason to reveal his noble birth until he can right his father’s wrongs. Acting as husband and wife will keep people in the village from asking questions that neither Charlotte nor Edward are willing to answer. But the game they’re each determined to play has rules that beg to broken, when the passion between them threatens to uncover the truth—for better or worse . . . 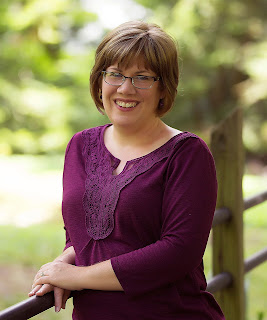 A love affair with historical romances led Susanna Craig to a degree (okay, three degrees) in literature and a career as an English professor. When she’s not teaching or writing academic essays about Jane Austen and her contemporaries, she enjoys putting her fascination with words and knowledge of the period to better use: writing Regency-era romances she hopes readers will find both smart and sexy. She makes her home among the rolling hills of Kentucky horse country, along with her historian husband, their unstoppable little girl, and a genuinely grumpy cat.

a Rafflecopter giveaway
Tilly at As the Page Turns October 03, 2016


Peter Ho April 3, 2018 at 14:36 PM
21 SECRETS TO BECOME FAMOUS MAGICIAN?
This is best course online about how to become a magician!
This training course offer free trial and 60 days money back guarantee
Link: Trial to Learn Mentalism Effects and Magic Tricks


Penny Albritton April 3, 2018 at 19:36 PM
GET YOUR SEXIESTBODY EVER BY YOGA?
Here are link: Link: 18 secrets to get your sexiest body ever by yoga