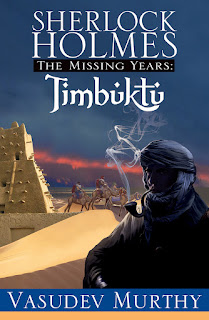 The one good thing about growing older is that you discover how phenomenally ignorant you’ve been all the preceding  years.

I no longer care for degrees and formal education. Now, it’s the process of learning for its own sake.  Tastes and interests do change over time. The same areas of knowledge that seemed so absurd and pointless seem to shimmer with esoteric and wonderful information. I can make very sincere and determined efforts to learn and be enlightened.

I’ve written a number of books and I can say that the ones I have a particular soft spot for are those where I had to make efforts to learn something new to make the story even more believable. The two Sherlock Holmes, the Missing Years books, Japan and Timbuktu, are examples of where I had a chance to apply that new found zeal to learn, learn and learn.

What I really like to do is find out what might have happened at different parts of the world during the same period. Once, an event could happen in a region and no one might know about it even a thousand miles away till several weeks or months later. In other words, the rate of influence took much longer that our current instant appreciation of events that may happen anywhere in the world. That means, cultures had a better chance to blossom in a somewhat insular way, with the occasional flavour of a new language or religion or cuisine mysteriously showing up. Those days are over now, and technology has started creating homogeneity, though it may still take several decades. But the heterogeneity of the past and the present make for a collage of fascinating material.

Research in literature to make the plot seem more believable is not new, of course. People like fiction with overlays of facts so that they feel a sense of familiarity and grounding, and can relate to the plot a little better.  Research is oftentimes like Brownian motion, which refers to the random movement of particles; you find one nugget and as you read about it, you discover something else in addition that’s equally interesting. It’s easy to wander away into new areas and ‘waste’ time but who can deny the happiness of discovering things you had no idea about.

The Japan book involved considerable digging into European politics, the Trans Siberian Railways, the ships of the time (1891-94), events in Japan, Korea and China, opium, botany, the art and music of various countries and, of course language.  The Timbuktu book was even more complex – the Vatican, the state of politics in Northern Africa, Timbuktu, the Tuaregs and their astonishing culture, the geography and music of the land, the Sankore Mosque, the situation in the lower Nile (Sudan), the ancient culture of the Meroes. Along the way, I learned about the Cathars and integrated that into the plot. I really didn’t feel like ending the book. Both the books would have seemed much lighter without the integration of colour and context, created by research, both internet and library.

Of course, you can’t have a jumble of incoherent facts thrown into a blender. There has to be an overall plot that is uplifted by the addition of relevant information gleaned from research.  And one must have common sense and know what to red-mark and delete.

Another danger is that of coming across as wide but not deep. That is possible. I view it as an acceptable risk simply because it is not possible to know every single detail and you may alienate the reader with too much. This is where the wisdom of an editor comes in.

Research requires patience, risk taking and lateral thinking. All must work in tandem to reveal strains of thought that can weave beautifully in a core plot. I like it and highly recommend it!

Find out about his book on Amazon

ABOUT THE AUTHOR
Vasudev was born in Delhi and has meandered around the world with lengthy stopovers in Tallahassee and Dallas. His books span a variety of interests, from Indian classical music to crime fiction, humor, and business management. A violinist and animal rights activist, Vasudev lives with his family and five snoring dogs in Bangalore, India where he runs a consulting firm.
Blog / Twitter
Tilly at As the Page Turns February 25, 2016

I am confident you've got a great enthusiast following there.blog outreach services