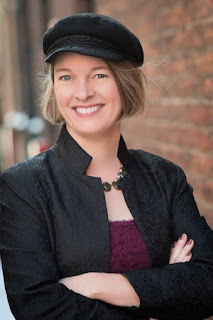 Kim Harrison, author of the New York Times #1 best selling Hollows series, was born in Detroit and lived most her her life within an easy drive.  After gaining her bachelors in the sciences, she moved to South Carolina, where she remained until recently returning to Michigan because she missed the snow.  She's currently working on the Peri Reed Chronicles, and when not at her desk, Kim is most likely to be found landscaping her new/old Victorian home, in the garden, or out on the links.

In a nutshell, The Drafter is Bourne Identity meets Minority Report. While on task, special agent Peri Reed realizes her partner has put her name at the top of a list of corrupt agents. Abandoning her employer and partner both, she has only her intuition to guide her as she tries to clear her name and bring down the agency that trained her. It’s a SF, thriller, action kind of story, fast paced and with a lot of attention put on relationships and how they move us. 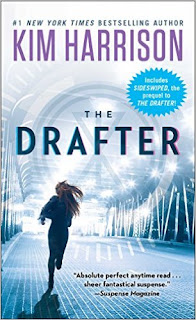 It’s no coincidence that the main character in The Drafter is dealing with similar issues as a person suffering from Alzheimer’s. I took Peri Reed’s coping techniques and a few of her gut reactions from the same. Her special skill destroys her memory, and though she occasionally regains it, she’s incredibly reliant upon those she trusts to keep her centered and herself. Her special ability make her very powerful, but it’s tempered by the vulnerabilities an Alzheimer’s patient deals with every day. I wrote The Drafter to say that those dealing with memory issues are still important, still worth considering, and still part of society.

Bu-u-u-ut, you can skip right over that and still enjoy it as an action thriller with a modified-human twist.

My ideas form slowly, over the course of years, and most of my series plots are developed by taking two or three of these “I wonder if” concepts and mashing them up together. The setting is almost as important as the characters, and I’ll often research a city and gain ideas there as well. But what I look for most is that the ideas touch upon something that can be experienced, be it joyful, such as finding an enduring love, or painful, as in dealing with memory loss. The Drafter, incidentally, deals with both.

At a recent family reunion, my aunt pinned me in a corner, demanding to know how I had time to landscape a tired yard, knit five baskets for Easter, walk the dog, rake the leaves, and still have time to write nine to five. My answer? Everything out of my office is therapy, and it’s true! Writing can be so mentally taxing that at the end of the work day, I’m very eager to dig into some of life’s daily challenges, seeing it as a relief, not a chore.

What do you like the most about being an author?
I am creative every day in ways I never imagined. I can arrange my day as I see fit to take advantage of an odd bit of sun in the garden or an invite from my mother to go to lunch, or even take a day off to be with a sick child without worrying if I will have a job when I get back. I can invest my time and energy as heavily as I want without the fear of losing my time-investment due to downsizing. Occasionally, I have the opportunity to work with incredibly talented people who know more than I do about this incredibly complex, markedly small world of publishing. I can touch the lives of people I would never otherwise, bring my thoughts to theirs, which is heady in itself, and a privilege that I have the greatest respect for.  It’s a profession that goes all the way back to the fire at the mouth of the cave, and it centers and connects me. What more could you ask for?

I have one piece of advice I like to give out: write like you have the contract, which means, write with purpose and a goal, not a long term, but short term. One page. One chapter. Whatever you suits you. Don’t go back and rewrite until you get to the end of the story, but do go back and make notes in the margins when you see the need to change something. Save actually doing it for the rewrite, otherwise you will be rewriting the same chapter for a year.