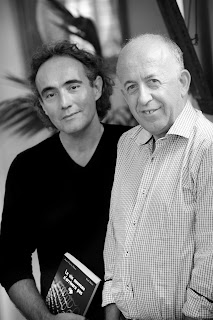 Jean-Pierre Alaux and Noël Balen, wine lover and music lover respectively, came up with the idea for the Winemaker Detective series while sharing a meal, with a bottle of Château Gaudou 1996, a red wine from Cahors with smooth tannins and a balanced nose. The series has 24 titles to date and is a hit TV series in France. So far 10 have been translated. Jean-Pierre Alaux currently lives in southwestern France and Noël in Paris. They both are full-time writers and participate in the TV adaptation of their series.
Translator Sally Pane studied French at State University of New York Oswego and the Sorbonne before receiving her Masters Degree in French Literature from the University of Colorado. She has translated several titles in this series.
And Anne Trager has a passion for crime fiction that equals her love of France. After years working in translation, publishing and communications, she founded the mystery and thriller publishing house Le French Book, dedicated to picking top mysteries and thrillers from France and translating them into English.

Their latest book is the cozy mystery, The Winemaker Detective: An Omnibus. 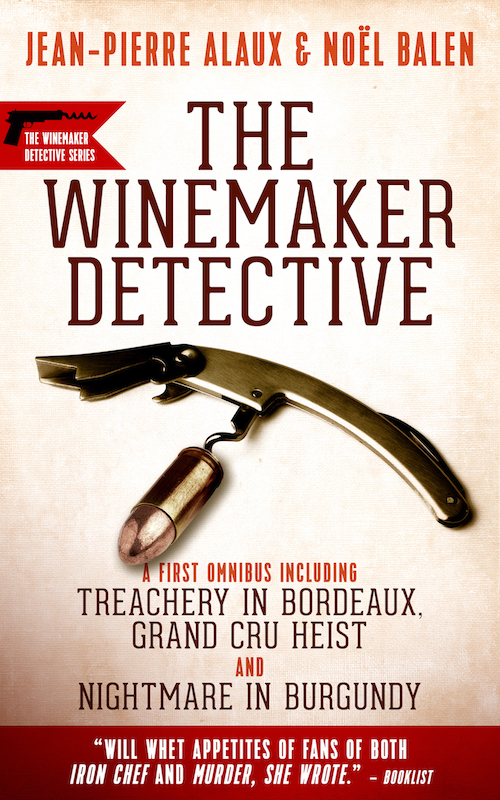 An immersion in French countryside, gourmet attitude, and light-hearted mystery.


Two amateur sleuths gumshoe around French wine country, where money, deceit, jealousy, inheritance and greed are all the ingredients needed for crime. Master winemaker Benjamin Cooker and his sidekick Virgile Lanssien solve mysteries in vineyards with a dose of Epicurean enjoyment of fine food and beverage. Each story is a homage to wine and winemakers, as well as a mystery.


In Treachery in Bordeaux, barrels at the prestigious grand cru Moniales Haut-Brion wine estate in Bordeaux have been contaminated. Is it negligence or sabotage?
In Grand Cru Heist, Benjamin Cooker’s world gets turned upside down one night in Paris. He retreats to the region around Tours to recover. He and his assistant Virgile turn PI to solve two murders and very particular heist.
In Nightmare in Burgundy, a dream wine tasting trip to Burgundy that turns into a troubling nightmare when Cooker and his assistant stumble upon a mystery revolving around messages from another era.
This made-for-TV series is "difficult to forget and oddly addictive" (ForeWord Reviews).

What authors have inspired you and your writing?

Perhaps the first to mention is Georges Simenon, because he was an expert in the art of creating mysteries with atmosphere in few words. Even today, rereading Simenon is a pleasure unlike any other. His work is timeless. Our references also include other classic authors such as Maupassant, Mauriac and Balzac, along with such foreign authors as Henning Mankell and Andrea Camilleri. It is hard to pick just a few authors of the authors who have inspired us directly.

What is it about the genre that makes the story translatable to other cultures?

Our books are set in the world of wine and winemaking. Wine by definition is a drink that brings people together. The history of humanity is intertwined with the fruit of the vine. Rare are the cultures that have not given wine some place of honor. Also, it is not a coincidence either that our central hero Benjamin Cooker is part British. Haven’t the British been one of the best ambassadors for Bordeaux wines? It seems natural that a wine-base mystery series will find a place in all countries where wine plays a role in the culture.

What makes your novel quintessentially "French"?

Well, France is the world’s top producer of wine and has a long-standing reputation in this area. Wine may be made throughout the world, but France still holds more than its share of top estates and names in the business. And the stories about legendary wines are deeply rooted in France, in Bordeaux and Burgundy. Our hero benefits from vast knowledge in this area, and France’s cultural heritage, both the vineyards and architectural sites, adds a dimension to these books that stimulates the imagination. Who doesn’t start dreaming when they read about the countryside around Medoc or the Yquem fortress surrounded by morning fog?

What was it about this book specifically that will appeal to American readers?

Americans have an understanding of the wine world that is only matched by the Belgians in terms of European wines. This knowledge lends itself to enjoying the universe in which Benjamin Cooker works. The series is meant to be both fun and to teach readers something. The places we mention — restaurants, sites and more — are worth the detour in real life too, and all the information about wine is all thoroughly researched and accurate. We are not yet finished exploring France’s wine world. We are Epicurean, and will remain so, and we know that the wine world is an endless source. The more you think you know, the more humbling it becomes. There are so many fine wines to drink, and every year Mother Nature makes something new. This series could go on infinitely.