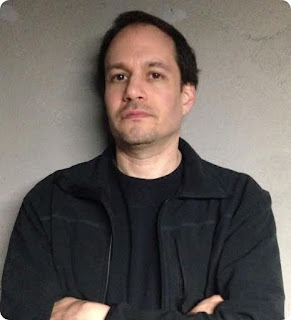 Joe Canzano is a writer and musician. He lives in New Jersey, U.S.A. His short stories have appeared in a half-dozen printed literary journals, as well as in the Akashic Books online series, “Mondays are Murder.” He recently formed his own publishing company, Happy Joe Control, and published his debut novel, Magno Girl.
For More Information
About the Book: 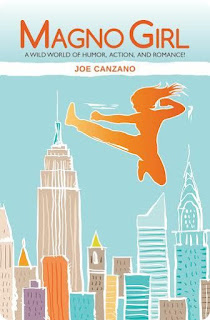 When a Manhattan pizza maker is found dead in his own dough, Magno Girl enlists the aid of her biker ninja boyfriend to help solve the crime – and quickly discovers there’s more to the pie than meets the eye, including a sinister plot that spans the globe.

Magno Girl leaps into action. After all, she can fly, she can fight, and she can use her fearsome superpower, the “Gaze of the Guilt,” to bring a hardened criminal to his knees. But the road ahead is hard. The city’s other superheroes despise her, and the cops don’t want her around, and her own mom won’t stop spitting out advice about marrying a “respectable guy” and trading in her crime-fighting career for a baby carriage—but is she attracted to “respectable guys”? And is she interested in emotional commitment? And will finding real love be her biggest challenge of all?

Welcome to the world of Magno Girl, an absurd place filled with humor, action, and romance.

It’s a comedy about an idealistic female superhero in New York City. She discovers a lot of other crime fighters are not quite so idealistic. In fact, neither is her mom, who likes to give her advice - and neither Is her boyfriend, who wants her to do a few TV commercials and make some money.

I like to make people laugh. I like to point out how absurd the world can be.

I always have a plan when I start, but then I change it because it invariably isn’t working as well as I expected.

Your book is set in New York City. Can you tell us why you chose this city in particular?

Superhero stories are about people, and there are a lot of them in New York City.
Also, I’ve been there many times and that was helpful.

Yes. NYC is a place filled with energy and crazy characters. I think it’s a place that accurately reflects the feel of the book.

If we were to meet for lunch to talk books, where would we go?

Any local pizza place would be fine.

Read a lot of fiction and try to be objective about your own.

Thanks for having me here. Right now, people can get Magno Girl for just 99 cents at these major sites:
http://www.happyjoe.net/promo.html