Guest Post from Annelies George, author of Quest to the Unknown 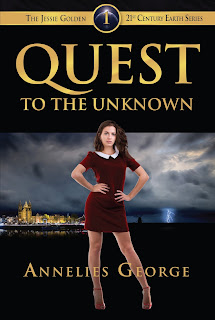 Quest to the Unknown revolves around up-and-coming Dutch reporter Jessie Golden, ready for her first holiday with business mogul and playboy Carlos Gomez, with whom she is engaged in a budding romance. Her journey begins when she finds a folder full of information on a mysterious woman named Nancy and her son Paul, leading her to an unexpected quest. Soon thereafter Jessie is confronted with a series of unexplainable supernatural occurrences. She realizes there is no such thing as coincidence, although she can’t unravel the true meaning of her quest nor her link to Nancy and her son. At the same time Jessie believes Carlos’ father has ties with some questionable characters. Startled by a series of unexpected events she reaches out to Ed Turner, Carlos’ right-hand man. In order to protect the one she truly loves, Jessie starts an investigation that points to the murky world of the mob. When a stranger is constantly following her, Jessie’s life is in serious danger. Can the ones she implicitly confides in, still be trusted? The first part of the Jessie Golden 21st Century Earth Series, introduces the main characters of the saga in an intriguing story of exceptional mother love, the far reaching consequences of choices in life, genuine feelings, blind faith and brutal deception, set in a multitude of countries in today’s fast moving business world.

It’s always very interesting to look back and discover how things emerged. When I reflect on how I arrived to write the Jessie Golden Series, with part one Quest to the Unknown recently published, I can only conclude it’s there because another book isn’t! After years of hard work on my very first project - a novel based on my encounters with men in the dynamic business world -, I dropped it overnight due to some unforeseen circumstances that requested a complete rewrite of the story. Now was it coincidence or faith that led me into a different direction…..?!

Disappointed, I set the book aside, enjoying my summer holidays, totally not expecting at all that I would be back to writing again so soon. What did happen? Shortly after my return, I was overwhelmed by the remarkable life of a psychic. Inspired by these shocking facts a fiction tale popped up in my head and the Jessie Golden Series was born. At the same time I decided that the series had to reflect something relevant, two subjects that always have been top of mind, i.e., why is the world a cesspool of corruption, violence and terror and could there be a link with the increasing number of natural disasters?

Since I knew from the beginning the main lines of the series, I started my research into the world of the paranormal. I encountered some peculiar things, like the fact that a number of physics I interviewed stated independently of each other that a big natural disaster will occur in the future, leading to a complete clean up of this planet. It made me wonder. Ever since I was a little child, I dreamed over and over again about a series of different disasters leading to something frightening which was never revealed in that dream. Now I never paid attention to these recurring dreams. However, in combination with the interesting Theory of Quantum Physics, I began to reflect on the matter. It even led to the Loveable Light initiative and the awareness I would like to draw on the subject.

As any other author I automatically included other autobiographical elements in the plot, among other characters noticeable in the protagonist of the series, Jessie Golden, which didn’t go unnoticed. In her pre-Alzheimer’s time my mother was so engaged in the story that she exclaimed at some point: “Why did you never introduce me to Carlos?” I had a big laugh out on that one and explained to her the character Jessie is pure fiction, despite some similarities.

At present three books are finished, with two still to be completed in the series. In fact, I just started with part four, Living in destruction. To be continued!

Annelies George was born on 4 August, 1964 in Bussum, After the gymnasium, she followed a one-year course as an international secretary in Amsterdam. Immediately afterward she started to work for a law firm, studying finance, management and law during the evening hours with the goal of becoming a lawyer herself. A move to a different town brought her into the fast IT world, where she was employed by GE Capital, marking the start of a successful career in the international IT Finance world. Due to the intensity of the job and long working hours, she abandoned her plans for a law degree. At the age of 30, she was appointed to Benelux managing director of a US based lease company, a rare phenomenon at the time, since few women were holding similar positions in the specific branch in the Netherlands. Thereafter she accepted a variety of EMEA and regional management and sales roles with Cisco, Microsoft, and Hewlett Packard. Annelies still lives in Bussum and is taking care of her 83-year-old mother. She loves, among other activities, to paint and design necklaces when she is not writing. On occasion she likes to travel to discover new places and understand the different ways of living around the globe.

You can visit her at: https://www.anneliesgeorge.com