Book Blast! Roping the Cowboy by the Authors From Books 4 Us

We invite you to Marianne Stephens for authors at Romance Books ‘4’ Us' ROPING THE COWBOY: 9 ROMANCES ON THE RANGE Book Blast at As the Page Turns today! Marianne and authors will be giving away a $25 Amazon Gift Card! Leave a comment on each of their tour stops for extra entries! 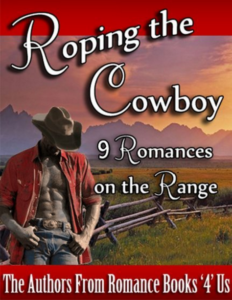 Sweet through sizzling collection of love stories includes contemporary, period, and historical romance, otherworldly romance, and romance with a touch of magic.


Roping the Cowboy by Nicole Morgan

Terry drove along Main Street on his way to The Cast Iron Skillet. He was tired and wanted nothing more but to kick off his boots, prop up his feet and open a cold beer. His mother had other plans for him, though, insisting that he drive into town to wish her childhood friend, Bea a happy birthday.

Just like the good son he always was, he hadn't been able to say no. His mother had laughed off his idea to show up later that weekend with belated birthday greetings and in the end, he knew it was always easier just to agree with her rather than even attempt at going a few rounds with his dear old mom. No matter how little she was, or how grown up he was, she would always be the victor in any argument.

Since it was a quarter past seven he was thankful to see most of the parking lot had begun to clear out. At least he wouldn’t have to make unnecessary small talk or shoot the breeze with any of the old timers who were constantly comparing him to his father.

Granted his dad was a good man, but sometimes being the spitting image of Terrance Sr. left little room for his own identity in this quaint little town.

He pulled alongside the brick building and parked. The package his mom had sent ahead for Bea’s birthday was small enough that he was able to tuck it into his front shirt pocket as he walked around to the main doors.

From the minute he stepped inside his senses were hit with the delicious scent of chicken fried steak and all sorts of other goodies. His stomach growled in anticipation and he suddenly wasn’t very annoyed by his mother’s request.

Bea was her usual chatty self behind the lunch counter, going on about her new grandbaby and his first steps. He couldn't help but grin at her joy. It wasn't just in her smile but in her voice and eyes. She certainly was a proud grandmother if he ever saw one.

A soft feminine voice called out and he turned to see where it was coming from. An attractive woman sat in the corner booth. Her hair was dark and long with a bit of curl at the ends. She was pretty. So pretty, in fact, he knew that she wasn't from around here. A face like that he was sure he would have remembered.

She smiled at him and looked almost embarrassed. It was then that he realized she had been talking t him.

“I’m sorry. Hello.” He tipped his hat toward her as he bowed his head. “How are you tonight?”

"Terry? Terry Reynolds, what on earth are you doing here?"

Bea’s loud, but excited voice interrupted his attention on the pretty brunette as she came over and nearly tackled him with a hug.

Once he regained his balance he laughed and offered her a hug. “Well you don’t think my mother would let one of your birthday’s go by without offering a proper gift, do you?”

He pulled the small box from his pocket and handed it to her. “I was told to deliver this to you with the message that she loves you.”

“Oh now, if your mother isn’t just the sweetest. Come now, sit.” Bea motioned for him to take one of the stools at the lunch counter. “Tell me, how’s she coming along out there in Florida? She and I have played phone tag a few times but we just can’t ever seem to catch up.”

"Well, you have her sister to thank for that. You remember what a social butterfly she was. She's got mom going out to dinner and all sorts of things. They're like a couple of teenagers." He laughed.

“Yes, well Ruthie always was young at heart. So, tell me how you’ve been. We don’t see you much in here anymore. Everything okay out on the ranch?”

“Mmm Hmm. I know you. You’d never leave that ranch if it wasn’t for your mom making you come to town, young man.”

“You know she means well.”

“Yeah yeah.” He smirked and leaned in closer. “Listen, what do you know about that girl
back there in the corner booth? Is she in town visiting a relative or something?”

Bea’s eyes lit up. “She is a pretty young thing, ain’t she?”

He shook his head and sighed. “Can you just answer the question, Mom?”

Laughing she patted his hand and whispered, “Oh alright. I’ll give you a break. Her name is Andie Donahue."

The authors are giving away a $25 Amazon Gift Card!


a Rafflecopter giveaway
Tilly at As the Page Turns January 04, 2017

Great post and I love your blog :) Thanks so much for hosting us with our Cowboy Set!

What a fabulous set and a great price! I wish you all the best!

Thanks for hosting us! :)

Thanks for helping us out :)

Thanks so much for sharing our Sexy Cowboys! :)