Today our guest author is Cynthia Sally Haggard, author of the historical novel Farewell My Life.

Thank you for playing Book Trivia with us!

Everyone knows Miley Cyrus is the wild child in the music business.  But she read your book and wants to let you know that it changed her life for the better.  Why did your book give Miley a new lease on life?

She learned that Grace’s discipline of being with her violin (or anything) for five hours a day gave her the steel to meet new challenges.

You are being pulled over for speeding.  When the officer asks you for your license and you discover you left it at home, you decide to pull out your book instead.  What do you tell the officer?

“Officer, I was so moved by the end of the road of this 500-page novel, I didn’t realize I was actually driving on one.”

Superman has decided to pull out one of your characters to be his sidekick.  Who is it and why?

Father Jerome, whose silver tongue can charm anyone into doing anything.

The book cover, whose unconventional dark simplicity perfectly mirrors the mood of Farewell My Life.

A homeless man was caught stealing your book out of a bookstore.  When asked why he did it, he opened the book and pointed a passage out.  What was that passage?

Frau Varga got off the chair. “Come.” She led the way to the dining-room parlor and made gestures to show them that she intended to sleep on the foldout sofa. She dragged the sofa so that it barred the front door of the apartment.
“It doesn’t look comfortable to me,” said Violet. “You’ve got freezing drafts coming in through that front door.”
“I am happy.”
“But you don’t have a headboard.”
Frau Varga laughed. “I need not, Fräulein Vi’let.”
“Are we safe?”
“Today, we have full of peace. But if anything happen,” she added, “I swear at them in Berlinish.”
“What could happen?”
“Fräulein Vi’let, two years ago, it bad. When der Kaiser deposed, people shot in the streets. They threw hand-grenades from the Brandenburger Tor. They waved red flags, they shouted slogans.” She made gestures. “It crazy.”
“Those were the Spartacists?” asked Grace. She remembered Mr. Russell trying to dissuade them from going to Berlin.
Frau Varga stared. “You heard in Amerika, Fräulein Graatz?”
“Could there be problems again?”
“Everything quiet now,” replied Frau Varga, shrugging. She patted Grace’s arm. “Worry not.”
“I’m not worried as long as you’re not,” remarked Violet.
Grace frowned.
“Fräulein Graatz, worry not. Look!” She swept aside the bedclothes to show the knife that hid under her pillow.

You have been told your book has won one free year on a billboard in any one state.  What state do you feel would be best for your book and why?

District of Columbia. The first part of Farewell My Life is set in the District, in Georgetown. 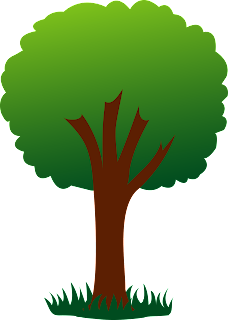 Linden Tree. Berlin is populated by Linden trees, and a Linden Tree is featured in Farewell My Life’s closing pages. 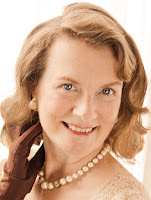 Cynthia Sally Haggard was born and reared in Surrey, England. About 30 years ago she surfaced in the United States, inhabiting the Mid-Atlantic region as she wound her way through four careers: violinist, cognitive scientist, medical writer, and novelist.

Her first novel, Thwarted Queen a fictionalized biography of Lady Cecylee Neville (1415-1495), the mother of Richard III (whose bones were recently found under a car-park in Leicester,) was shortlisted for many awards, including the 2012 Eric Hoffer New Horizon Award for debut authors. To date, sales have surpassed 38,000 copies.

Cynthia graduated with an MFA in Creative Writing from Lesley University, Cambridge MA, in June 2015. When she’s not annoying everyone by insisting her fictional characters are more real than they are, Cynthia likes to go for long walks, knit something glamorous, cook in her wonderful kitchen, and play the piano. You can visit her at www.spunstories.com.

Angelina led a life which required her to fib. When Angelina, the black sheep of the Pagano family, 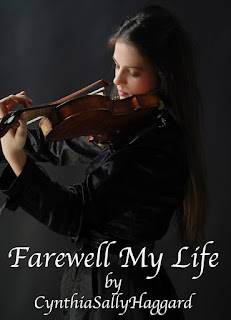 meets the mysterious Mr. Russell, she has no idea that she has seen him before…in another country.

And so begins Farewell My Life, a novel in three parts, which spins an operatic tale of dangerous love and loss.

The Lost Mother, the first part of this novel, slices back and forth between time and space, opening in the charming village of Georgetown, Washington D.C. while reflecting a family’s troubled past in the lovely village of Marostica in the Italian Veneto.

An Unsuitable Suitor, the second part of the novel, is a Cinderella-ish tale with not-so-charming princes who inhabit the edgy setting of 1920s Berlin.

Farewell My Life, the last part of the novel, set again in Berlin, Germany, during the dark 1930s as the Nazis gain power, takes comfortable lives, assumptions and civilizations and crumbles them into ash.

And all of this revolves around Grace, Angelina’s younger daughter, whose fabulous talent for the violin promises a shimmering career.