Book Feature: The Seer of Grace and Fire by Natsuya Uesugi - Win a $25 Gift Card 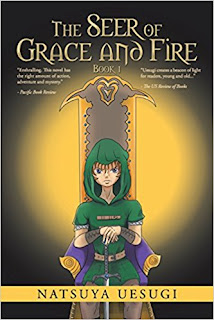 Title: The Seer of Grace and Fire
Author: Natsuya Uesugi
Publisher: XLibrisUS
Genre: Fantasy
Format: Ebook
A human cleric translating an elfin prophesy must bring the work to the high court at Kannon in faerie before DarkFall, the solemn anniversary when all the male newborns were murdered seventeen years ago. If the translation does not arrive in time, all is lost. Timorn, a seventeen year old ranger travels the human towns, hiring out his services. A mysterious elfin woman hires him to take her to Kannon before DarkFall, and only he can lead her with his purple faerie eyes.

The evil Valkyris is amassing an army to attack Kannon at DarkFall, insisting she possesses the prophecy. Sending her dark mage Dalannin to infiltrate the faerie, he marches his demon hordes toward Kannon and sneaks into the palace. Ethesian, the seventeen year old faerie daughter of King Ailon, plays the dragon lyre, a female magic. Yet recently, she has started having prophetic dreams as if she were male. When a lie is revealed, Ethesian is tasked to study magic she must master before DarkFall. Will Timorn reach Kannon before the Valkyris, and Ethesian master a magic she shouldn’t possess? Secrets and lies, revelations and wizardry, DarkFall is coming and so is the reluctant faerie who would be king. Learn more in the first book of the dark fantasy trilogy, The Seer of Grace and Fire.

Natsuya Uesugi is a systems analyst and has worked in the design of aerospace, semiconductor and financial systems. With an MBA in International Management and a minor in Japanese, Natsuya has been around computers most of his life. He is author of the science fiction grydscaen novels and manga, and the yaoi novellas and manga, graphic noiz. He studied animation and game design in art school and created all the illustrations and cover art for The Seer of Grace and Fire. He enjoys skydiving, cosplay, anime and writing poetry.

Wednesday, January 10
As the Pages Turn
A Title Wave

Monday, January 15
All Inclusive Retort
A Taste of My Mind

Friday, January 19
From Paperback to Leatherbound
Harmonious Publicity
Tilly at As the Page Turns January 10, 2018