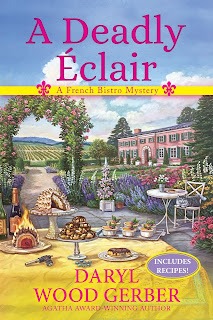 National best-selling author Daryl Wood Gerber delivers an irresistible tale in A Deadly Éclair. Brimming with the ingredients of a winning recipe—a to-die-for setting, a captivating cast of characters, fabulous French bistro fare, and sumptuous suspense—A Deadly Éclair marks the advent of a mouthwatering new mystery series.
About  A Deadly Éclair:  It’s always been Mimi Rousseau’s dream to open her own bistro, but it seems beyond her grasp since she’s been chased back home to Nouvelle Vie in Napa Valley by her late husband’s tremendous debt. But when Mimi’s best friend Jorianne James introduces her to Bryan Baker, an entrepreneur who invests in promising prospects, Mimi’s dream becomes a reality and Bistro Rousseau is born. Now, working the bistro and inn until she’s able to pay it off and call it her own, Mimi is throwing the inn’s first wedding ever.

This wedding will be the talk of the town, as celebrity talk show host Angelica Edmonton, daughter of Bryan’s half-brother, Edison, has chosen the inn as the perfect venue for her extravagant nuptials. Anxious, Mimi is sure things are going to turn south—especially when Edison gets drunk and rowdy at the out-of-towners’ dinner—but by the evening, things begin to look up again. That is until morning rolls around, and Bryan is found dead at the bistro with an éclair stuffed in his mouth. And the fingers point at Mimi, whose entire loan is forgiven if Bryan dies.

Now it’s up to Mimi to clear her name and get to the bottom of things before the killer turns up the heat again. Murder, after all, is not a good addition to any menu….
A fresh, fun, and fantastic French Bistro tale, A Deadly Éclair is peppered with charm, wit, and swoon-worthy recipes.  This clever culinary cozy will delight with its tantalizing twists and turns, sizzling storyline, and masterful plotting.  A delicious, decadent and delectable new mystery, A Deadly Éclair is resplendent with flavor, spice, and zest. Written by a true master of the cozy mystery, A Deadly Éclair is a tale to be devoured.
Find out more on Amazon! 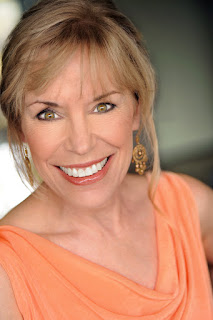 Agatha Award-winning Daryl Wood Gerber is best known for her nationally bestselling Cookbook Nook Mysteries as well as the Cheese Shop Mysteries, which she pens as Avery Aames. Daryl has also penned two stand-alone suspense novels, Day of Secrets and Girl on the Run. Fun tidbit: as an actress, Daryl appeared in “Murder, She Wrote.” She loves to cook, and she has a frisky Goldendoodle named Sparky who keeps her in line. Visit Daryl Wood Gerber online at: www.darylwoodgerber.com
Tilly at As the Page Turns November 08, 2017