Well, this is an honor, I must say. Most of the time I’m being told to be quiet...how refreshing to be asked to speak.

My name is Josephine Mann. I reside in New York City, born and bred. It is 1874, and the world is full of amazing things at the moment now that the War is over and the country beginning to heal a bit.

Life has been...interesting, to say the least. I don’t really remember my parents. They were lost to cholera well before the War started, and I was raised by the Good Sisters in Our Lady the Star of the Sea convent. What headaches we caused the Mother Superior growing up!

I left when I was fifteen, and have been fending for myself since. I’m a restless soul though, and have never really found a position that utilized my talents to their fullest. Until lately, that is. The moment I laid eyes on Professor Alistair Conn, I knew I’d found my true calling—making sure the man was fed and dressed properly! No, that isn’t quite fair.

Alistair is the smartest man I’ve ever met. He simply doesn’t think about things like matching socks and brushed hair. He’s thinking about so much more important matters, like creating a being that can do the more dangerous jobs our firefighters and policemen have to expose themselves to. To be honest, sometimes he humbles me with his dedication. Anything I can do to help is a blessing to him, I know...even if he forgets to mention it.

I’ve met some lovely people through my position as Alistair’s assistant. For example, our landlady “Ma” Stark. She’s already become a second mother to me—very welcome since I have so few memories of my own. She’s been such a dear about my cat, as well. I truly feel that Priss and I have found a real home at last, and I can’t wait to see what adventures the future holds!

The Marvelous Mechanical Man is the first book in a Steampunk series featuring the adventures of Josephine Mann, an independent woman in need of a way to pay her rent. She meets Professor 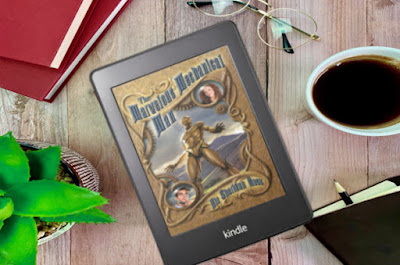 Alistair Conn, in need of a lab assistant, and a partnership is created that proves exciting adventure for both of them.

Alistair’s prize invention is an automaton standing nine feet tall. There’s a bit of a problem though…he can’t quite figure out how to make it move. Jo just might be of help there. Then again, they might not get a chance to find out, as the marvelous mechanical man goes missing.

Jo and Alistair find themselves in the middle of a whirlwind of kidnapping, catnapping, and cross-country chases that involve airships, trains, and a prototype steam car. With a little help from their friends, Herbert Lattimer and Winifred Bond, plots are foiled, inventions are perfected, and a good time is had by all. 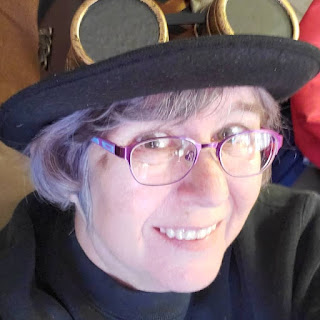 Rie Sheridan Rose multitasks. A lot. Her short stories appear in numerous anthologies, including Nightmare Stalkers and Dream Walkers Vols. 1 and 2, and Killing It Softly Vols. 1 and 2. She has authored twelve novels, six poetry chapbooks, and lyrics for dozens of songs. These were mostly written in conjunction with Marc Gunn, and can be found on “Don’t Go Drinking with Hobbits” and “Pirates vs. Dragons” for the most part–with a few scattered exceptions.

Her favorite work to date is The Conn-Mann Chronicles Steampunk series with five books released so far: The Marvelous Mechanical Man, The Nearly Notorious Nun, The Incredibly Irritating Irishman, The Fiercely Formidable Fugitive, and The Elderly Earl’s Estate.

Rie lives in Texas with her wonderful husband and several spoiled cat-children.